As you have no doubt seen, Five Parsecs will be available from Modiphius in a glossy, hardcover book as well as hitting retail. This is super exciting but I know you all have a ton of questions! 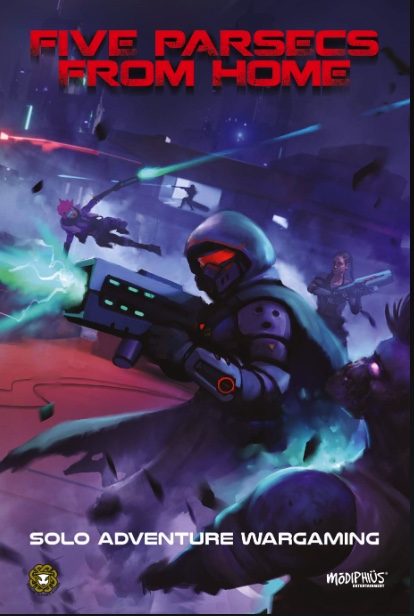 So let me try to answer as many as possible, in no particular order.

(With the caveat that detailed questions should go to Modiphius)

I still own it. Modiphius is publishing the new game, but I retain ownership of the IP.

What do I get if I buy the book on pre-order?

The pre-order gets you an early copy of the PDF right away to peruse and start playing. This gives us another week or so to catch any last minute typos.

The books should print in about a month or so if all goes well.

Will there be a US shipping option?

I've been told that once the books go to the print in about a month or so, there will be a US-friendly shipping option for the pre-order which would save you a bit on shipping.

You absolutely can order now to get the PDF ahead of time, but you'll pay a bit more for shipping.

Will there be a PDF only option?

Once the books are printing, a stand-alone PDF will also be available.

Will there be a retail version?

Some books are going into retail. I am not sure about numbers or through which distributors.

What about the old material?

This new edition replaces the previous version. In essence, it is "3rd edition". As such, the old version and expansions are currently not available for sale (though it will remain available in your library on the Wargame Vault page. If you run into any difficulties with this, let me know).

Bug Hunt is still available, serving as both an intro game and a standalone title.

EDITED FOR CLARIFICATION SINCE I AM BAD AT WORDS:

As with most old titles I've done, the old material, including expansions, will be available again in a bundle, likely as Pay What You Want, but I need to go through it all to find out what is compatible with what and what is not. Some of the oldest packs were getting a bit long in the tooth and were already having compatibility issues.

Watch this blog for news.

Time will tell. The current deal is for Five Parsecs.

What happens to Patreon now?

There will still be a 5P item each month. It will likely switch more towards scenarios rather than new rules, which is something I had been planning for a while in any event (and everyone likes more scenarios to play).

New scenarios will be compatible with both 2e and 3e as much as possible, for as long as interest remains.

Will there be new expansions from Modiphius?

This is planned yes.

What did not change:

The game is still miniatures agnostic, allowing you to use any figures you have (or intend on getting), it still uses the same core game engine, the game play loop of Town - Battle - Rewards remains the same. In fact, if you were playing one of the last updates, your crew can probably transfer over pretty readily (but there's some exciting reasons to start a new crew).

A number of rules have been tweaked and polished to remove some of the edge cases or just make things clearer. Notably armor is now handled by a saving throw, instead of a Toughness boost.

There are a lot of little tweaks like that to ensure the game runs as well as possible while remaining the same game you've come to enjoy.

Well, the visuals for one: The new layout should be much clearer and easier to use as well as lavishly illustrated in a way that really brings Unified Space to life for the first time.

* Pretty much every random table has been expanded: Results are better and more interesting now, entries that didn't work as well has been fixed up and there's more outcomes possible overall. This will also help long-term play as you'll have less duplicates.

* This carries over to other things too: For example the game now has 36 weapon types and over 60 types of equipment, including gun sights and weapon mods!

Equipment has also been reworked to be more interesting and exciting, cut down on overlapping items and fix any equipment rules that were a bit hard to use.

* Rules are now provided to play with a smaller base crew size, if you prefer using only 4 characters (for example).

* There are now 16 types of mission objective, depending on the type of battle you are facing, giving your crew far more to do than just shoot the bad guys in the face.

* 60 enemy types in total, with 22 personality types to lead them. All enemies have been touched up with bonuses, penalties or particular conditions to make them more interesting.

*Character creation now includes 6 types of alien character, robot characters and a total of 18 "oddball" character types. You can now have a proper space-opera crew. Each alien species has its own quirks and starting profiles taken from the Unified Space setting.

Additionally, these are fully integrated into the game. Many random events have different outcomes or effects if you have certain characters in your crew.

*Your starship now enters the game as well. Ships can get damaged, requiring you to repair them (or risk a disaster), can have special traits and can be upgraded with any of 14 upgrades, from drop launchers to military fuel converters.

Your ship can even be impounded or blown to bits.

*When traveling to a new world, a new starship travel events table is used.

*A setting chapter is included, introducing the player to the world of Unified Space, as well as a very cool colony map to use as inspiration. The game is also fully part of the Unified Space setting, reflected in both random events and characters.

*A 7 step story-driven campaign is included to play through, pitting you against an old rival out to make your life miserable.

*Options have been added for grid based gameplay on tiles, super-difficult Red Zone jobs and more.

*An extensive GM'ing and scenario section with rules for story connections between battles, 12 NPC profiles, mechanics for advancing plot points and faction conflict and a lot more.

This section is also useful for people who want to flesh out the narrative connections between their battles and is perfect for people who would like to run the game more like an RPG, where a GM creates scenarios and the players fight the bad guys.