So this took way longer than I had wanted, but I think it was worth the extra work. 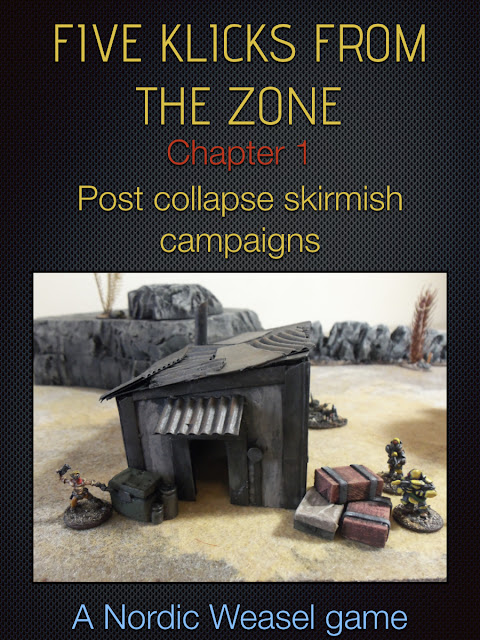 Five Klicks Chapter 1 is post apocalyptic skirmish warfare, Weasel style. Build a squad, send them out and hopefully they all gain in experience and cool loot!

I will make a longer post about the game, what went into it and why it took so long tomorrow, but for now, go grab it.
If you were a beta supporter and didn't get an email yet, hit me up at nordicweaselgames@icloud.com and I'll hook you up.

* The term Stash is now a proper rules term, which means it should be in bold in the text.

* A few clarifications to common questions have been added to the back of the rules. In particular: No, you can't take weapons off dead enemies.
Yes, during the campaign turn, you can use items from your stash without having to assign them to a crew member. Stashed items just can't be used in battle.

* When rolling your starting crew, the Fame and Freedom motivations no longer generate a Rival. It was getting a bit too hostile to start out.

* Quest Rumors and Clues have been cleaned up. Before, the terms weren't always consistent.
The way it works now is that if you dont have an active quest, all rumors/clues are always rumors (which help you get a quest).

Once you have an active quest, all rumors/clues you find are clues towards resolving that quest.

The only mechanical change is that getting a quest now removes ALL rumors, instead of just removing equal to the die roll.

There's probably no reason to print out a new copy.


Also included is the fantastic campaign tracking sheet Chris on the Discord made. It's a separate file in the download so go check it out. Its completely awesome.
Posted by Weasel at 20:40 No comments:

With spring approaching, the mind of young men and old geezers alike turn to the same thing:

"Can this game be improved in any way?"


So for fans of Renegade Scout, I have a few questions that will also go out by email to those of you who receive email through the Wargame Vault.
A lot of these revolve around how much value you put on maintaining the form of the original Rogue Trader mechanics vs having the spirit of them.

Why am I wondering? Because originally, I will admit I had no idea who the target audience would be. Renegade Scout is very much a product I made because I wanted it to exist and it didn't.
In my mind, I figured the primary player would be the Oldhammer crowd, hence things like compatibility was a key factor in the design.

But based on the emails I get and the conversations I have, I am not sure if that's really the case. I think a lot of people were in the market for either a more involved skirmish game and / or something with a bit of old school "feel" without being specifically retro.

I also found that people tend to adopt the Unified Space setting more readily than I expected (or mix it with their own setting ideas, which is awesome)

However I could also be wrong about that because the people who opt to write me are a self-selecting bunch!

So here are the questions. If you would like to answer these and give your input into the future of Renegade Scout, think about them then email me at nordicweaselgames@icloud.com

In the end, I opted against it, because as discussed above I felt fidelity to and compatibility with the original was important. But now I am wondering if this was a mis-step.

Would you prefer the wound/armor rolls to be merged into one?
Do you prefer them to be separate as they are now?
Do you have no strong preference?

* The character profile currently is the full profile from Rogue Trader. It's no secret that it's a bit long and occasionally you have to kind of hunt around for something each stat can actually do.

However, shortening it could be a concern for compatibility issues.

Would you prefer the profile to be shortened?
Do you prefer it as it is now?

* Reaction fire was decided against, due to my feeling that in a fairly alternating turn sequence it is less important.
But maybe this was a mis-step and the ability to have a couple grunts cover the advance of the rest "feels" very tacti-cool.

Would you prefer having a reaction fire system?
Do you think the game works better without one?

* The overall turn sequence is likewise an attempt at modernizing the old 40K turn sequence. It does provide a nice flow to the game, but can feel somewhat abstract at times.

* How important is 40K compatibility to you?
Was it a selling point? More importantly, have you actually used it at all? Would lacking it deter you from using the rules?

* How important is "pick up and play" versus scenario driven play?
Would you prefer if the game had more army building options for pick-up games? Would you rather have more material for scenario play?


Looking forward to your comments and thoughts!
Posted by Weasel at 14:56 No comments:

I thought I'd talk a bit today about the process I tend to use for ideas getting whittled down.


Step 0 is I have an idea in my head.
We all have those. Depending on caffeine intake, we sometimes have a lot.
Get three gamers together and get them talking and you will have 7 game pitches half an hour later.

This stage tends to deal in broad concepts and open-ended ideas.

For example:
"A robot skirmish game where your robot might malfunction and do random things!"

90% of the ideas from Step 0 never go anywhere. At this stage we're just dreaming and dreaming is easy (and fun!)

Why does an idea fail to progress from here? Usually once you think about it a bit, there's either an existing game that already does it well enough or the idea, after a bit of time to think about it, doesn't have enough legs to stand on.

I've said before that a good game is usually a workhorse system with 1 cool idea. But if the idea isn't cool enough, then it's just one more set of rules in a world that definitely doesn't have a shortage of game rules.

Step 1 is the notebook stage.
At this stage we start writing things down. This isn't writing a full game (usually).
For me, it's a mixture of writing out concepts ("Robot Morality!"), a list of desired content ("20 robot morality modules") and fragments of rules written out.

Churn out 2-4 pages of hand-written notes at this stage. You could be a modern person and use a computer but I sometimes tend to "think better" with pencil and paper.

80-90% of the ideas that make this stage never progress beyond it.
Trying to actually put an idea down on paper has a brutal tendency to reveal that it's all gibberish.
Maybe the mechanics you write out just aren't that great and the "right" dice roll or engine keeps eluding you.
Maybe the passion just runs out at this stage.

Step 2 is the draft stage.
Turn to your computer (or a bigger, nicer notepad I guess?) and start writing an actual, playable game.
At this stage, you are writing actual rules, translating the ideas from step 1 and your head into something a group could sit down and play.

Include the basic concepts needed to play: This version needs to account for common, obvious questions ("What happens if I shoot at a tank?") but it can (and should) leave out a lot of the chrome. Campaign rules, your D1000 table for Situational Robot Morality Quirks, the rules for off-map artillery fire, that stuff can all be left to the side.

What you are hoping to end up with is a set of rules that are playable, at least with your own group. Page count will mainly depend on how complex your project is. I'd say 20-30 pages is a good middle ground for a typical game but don't sweat it exactly.

Once you are at this stage? The failure rate will depend primarily on experience.
You see, at this point you have what a lot of people are perfectly happy with: A game that broadly works, that you can tinker with and which your group can play.
Heck, for groups with a fairly open-ended play style, this may be all you ever need. The GM or group fills in any blanks when they show up.

So progressing to the next stage is not always a requirement (or even desirable).
But if you want to publish this thing, then we gotta get over the hump to Step 3 and that is where things get gnarly.
If you are inexperienced, you will run into the fact that you may not know what to look out for: The game will have rules that are worded poorly or ambiguously. An important concept may never be explained because it was obvious to everyone at the table.
Maybe you really hate writing out terrain rules and now you have to account for all of that.

Filling out a game from Step 2 to a stage where you can publish is often 50-80% writing crap you don't want to write, because someone else will need it. I hate writing terrain rules, but they have to be in there because some guy in Virginia is not going to know how I handle it at my own table.

What about that section everyone skips that talks about in-game scale and what each figure represents? Anyone enjoy writing those?

I tend to call this "The Suck" because its writing things that aren't that much fun, but are important.

So between The Suck and all the things you don't know yet, there's a high chance your game stops here. In fact, take a look at almost any project on forums and message boards and this is where they died.
When I did research before doing Renegade Scout, I found 6 or 7 attempts at reviving / cloning / redoing Rogue Trader. They all died here.

Am I amazing at writing then, since I made it?
No, but experience counts for a lot here. If you have a mental check list of obvious things people will ask about (because they asked you about them last time), you know where things should go and you have a sense of how to phrase things, you can get to a point where only 10-20% of designs fail at this stage.
How do you get those? By doing it and screwing it up. Or by doing it and doing okay.  Or maybe your first game is great! Either way, there's no substitute for actually putting in time at the keyboard.
The good news is that while talent matters, a systematic sense of what to look out for is something anyone can develop with experience.

Step 3 is the Actual game
Okay, so you've tested your game, badgering someone else into testing it too, you've fixed all the stuff that wasn't explained well, tweaked the mechanic that was obviously broken, adjusted the thing that made no sense.
You've added your chrome and fluff text and found some stuff to put in there to look pretty (or go for the 80's typewriter look).

Congratulations. You have a game to inflict upon the world.
Pour one out for the 100 games that died along the way so that "Laser Robot Feels Bad" can fly to the top of the Wargame Vault best sellers list.


If you have questions, let me know.

PS: Someone should definitely write this game.
Posted by Weasel at 14:52 3 comments: