Unfortunately we had to put one of our cats to sleep yesterday, due to kidney failure.

Mittens was 17 years old, liked to snooze in the sun in the mornings, practiced getting the humans to fill her food bowl without having to meow for it and headbutting people for attention, preferably while they were playing video games.

She'd been part of the family as long as it has been a family. We found her as a stray in Vermont around when we got married. She drove cross country with us from Vermont to Oregon and flew halfway back to Michigan.
A well travelled lady of definite opinions, we'll miss her terribly. 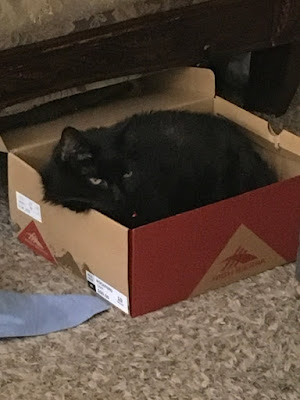 We also ended up with a vet bill of around 700 dollars. If anyone would like to help us out by grabbing a few things from Wargame Vault or by donating to nordicweaselgames@icloud.com we'd deeply appreciate it.

All the best and you'll hear from me soon on happier topics.


EDIT:
I accidentally put the wrong address in the original post. The paypal address is nordicweaselgames@icloud.com
If you tried to send to the "paypal.com" address it went nowhere. Just cancel the payment and you can redo it. So sorry!
Posted by Weasel at 10:28 1 comment:

As promised, the next release would be mostly bug-fixes and that's what we got.

Basically, a number of typos, awkward wordings and similar have been cleaned up.
If you printed out 1.12 there is no reason to print it all again.

If you waited to print, go for it now.

The main correction that might affect game play is that the bonus XP for killing a Boss is now applied whenever you kill a Unique Individual (which was meant to have been the case in 1.12).
I also adjusted the Trade table a tiny bit to lower the odds of useless junk.
Posted by Weasel at 22:26 1 comment:

The first magic using class is available for Five Leagues: The Sooth Sayer.

A semi-mystic character who can predict what is going to happen both off the battle field and on it.

The supplement includes the character and campaign rules needed, new items to make or search for and rules for how to use and improve The Sight.

While each magic class will have its own quirks and mechanics, this will likely be the general template they will be based around.


https://www.wargamevault.com/product/299861/Sooth-Sayer-A-Five-Leagues-character-expansion
Posted by Weasel at 12:04 No comments:

The year of the Weasel. Or at least another one

So I was just informed that 2019 is going to have a sequel, so I figured I should say a few words.

Learning from past experiences,I am not going to talk too much about specific plans for the new year since that stuff never actually works out.

So instead let's look back at a few things that happened last year personally and professionally and I guess shed some light on some decisions.

* I've mostly decided to step back from social media. I've written and deleted a few posts about this but in the end I guess who cares?

The RPG social media scene has 0% relevance to anything I want out of gaming, so I stopped reading it. I'd say something incisive but honestly, my interests have just drifted and what I want out of gaming is not what the D&D/OSR oriented social space caters to.

I realized after a little while that in part, it was just a reflex. You see the icon and you click on it. What for? No reason really. You aren't going to meaningfully interact with something someone said while you are waiting in line at Best Buy. You are just conditioned to click the button.

So I quit all that and aren't likely to go back. We do have a twitter account now, which is purely for announcements.

* I do want to get back into the wargamer blog sphere more though.
I am not sure if it's the tendency towards longer posts and the fact that you aren't writing "for a discussion" or something else, but I find the content tends to be of a bit higher quality.

* This all doesn't mean I am vanishing off the internet. Ya'll clearly have no difficulty reaching me by email or otherwise, so please continue doing so.

* We started a Patreon. I had no idea how that might go but so far, I think it's been pretty positive and has resulted in some cool bits.
I'll have to continue dialing it in over time, but I do think it's the solution to the ongoing support question.

I must admit it does add a new level of worry. Now I not only have to fuss if sales are low but also when I see the Patreon go down. But you win some, you lose some, right?
There's also the question of what people want out of it and how those expectations match up to what I want to make. That's all stuff we can figure out though. I think ?

* In the war gaming scene, I think "War band" type games are still the big hot thing, but I do think it'll level off in the new year. If you want to get everyones attention, figure out the next big wave and get in front of it.

* Solo gaming continues to be super strong. I guess I should be worried if I am ending up as "The solo rules guy" since I don't want to ONLY write solo games.
However, doing solo stuff is also really rewarding and when I get emails about "You got me into / back into minis gaming", it's usually from those folks.

I imagine 2020 will still have a strong solo focus, but it won't be exclusively so.

* A thing I want to focus more on in 2020 is barriers to entry for gaming. I've always aimed most of my games at a very affordable, easy level: A few squads, some terrain, 2 feet of table space, one rulebook, that kinda thing.

I want to continue working on and refining that. I often talk to people who are interested in miniatures gaming, who 100% would be into it if they got to try it or who have played and enjoyed it, but they are scared off by the perceived costs, work involved, difficulty in getting started etc.

The big boys (GW, Battlefront etc.) are good at teaching you a lot of things as a new player, but they still come with the expectations for a 400 dollar army and a 6 foot dining table.

* I am not going to talk about specific projects for the new year. I have several on my "viable" list, plus I have outstanding "debts" to finish and release/rerelease.

* On a personal level, as you might be aware we got run over pretty hard at the beginning of last year.
Between our landlord fucking us and my wife having to change jobs unexpectedly, we had some huge unexpected expenses and missed out on some money we'd been counting on, which meant running up tax debts.

After that, we had another rather tumultuous thing happen, which took our lives over for a bit and caused a ton of stress.

If you've wondered whether I was slowing down in writing/releasing stuff, that's the reason. I've had periods where I simply didn't have the mental reserve to create, because we were dealing with ..well... life.

This year has felt like it was one long crawl back to normality and now, as I'm looking out the window in January 2020 while death metal is growling out of my computer speakers, it finally feels like we're here again.
In fact, it feels like we're better than we were before, but you know, I could have done without getting fucked for a year straight.

But on the upside, we're all healthy, the place we live at now is great, we have a core of friends who looked out for us.

And I had a thing I didn't even realize:

When everything came crashing down around our ears: The landlord was threatening us, our lawyer was saying "yeah, they're wrong but that probably won't matter" and we realized my wife would have to switch jobs, lose pay and miss out on a bonus we had planned around (stupid I know).
We were faced with moving in the middle of winter and having a budget of 0 dollars to do so.

I was desperate and late one night, I made a blog post asking for help because I had no idea what to do.

And people responded. People I knew threw money into the bin. People I didn't know. People who said "A friend of mine said you were cool and needed help", People who said my games had helped them out so now they were saying thanks.

At the end of it, we had enough to cover our moving expenses and move-in deposits etc.

I was stunned. I was crying in front of the computer on more than one occasion.

The fact that a bunch of relative strangers would do something like that blew my mind. I still sometimes wonder if it actually happened, if that makes sense.

If you want to see more material for our titles or just keep NWG going strong, consider supporting me on Patreon

https://www.patreon.com/nordicweasel
Posted by Weasel at 11:07 4 comments:

I have a request that isn't strictly NWG related.

I am looking to pick up a couple of fantasy novels in Swedish but getting them online is looking to be a fair bit of trouble. There's the Swedish counterpart to ebay but a lot of sellers there don't ship internationally.

What I am looking for is someone who wouldn't mind picking up a couple of novels for me, then shipping them to me. I'll pay the costs of course.

If you are in Sweden and would be up for this, drop me a line at runequester@icloud.com
Posted by Weasel at 12:09 No comments: