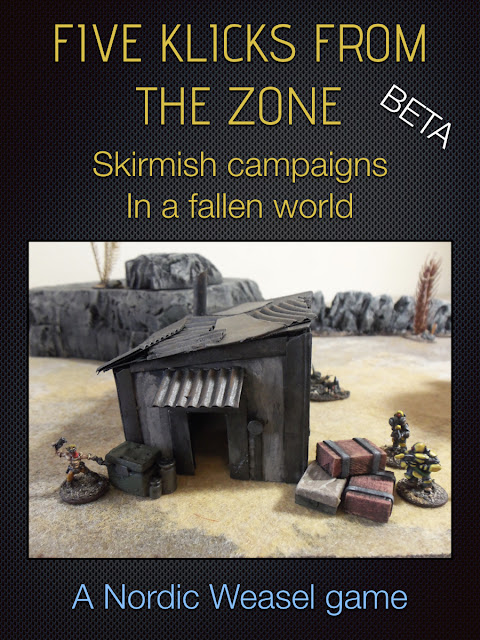 There's 2 requests that are made all the time when it comes to our "Five [units of measurement]" series of solo games.
One will be discussed later but the other is post apocalyptic gaming

Well, wait no more because Five Klicks from the Zone is here.

Take a squad of hard-nosed survivors, delve into the forbidden zones and reclaim civilization from the mutants, the warlords and whatever lurks in the rubble.

As you play, your squad will gain experience, find cool loot and face off against dreadful enemies, all perfectly adapted for a fun solo gaming experience (or bring a friend and split the squad!)

This is not the final version of the rules.

We are doing a public development where new versions will be made available on a very regular basis.

Right this moment, the rules contain the core of tactical game play with a fully playable but VERY simple campaign section. Over the coming weeks, the content will be expanded with all the lovely campaign action and D100 tables you expect.

Buying the game now gives you the following benefits:

* You get to see the game as its being developed and can provide feedback and suggestions on each part as its added.

* You get the game for 10 dollars rather than the final price of 15.

* In addition, I am throwing in a copy of Five Parsecs: Salvage Crew as a freebie. Cool huh?


So go grab it. 10 dollars gets you into the beta and you can start setting up a squad and testing the tactical environment tonight!

Then as each day goes by, more and more content will appear until you have the final game in your hands.

https://www.wargamevault.com/product/284182/Five-Klicks-from-the-Zone
Posted by Weasel at 21:21