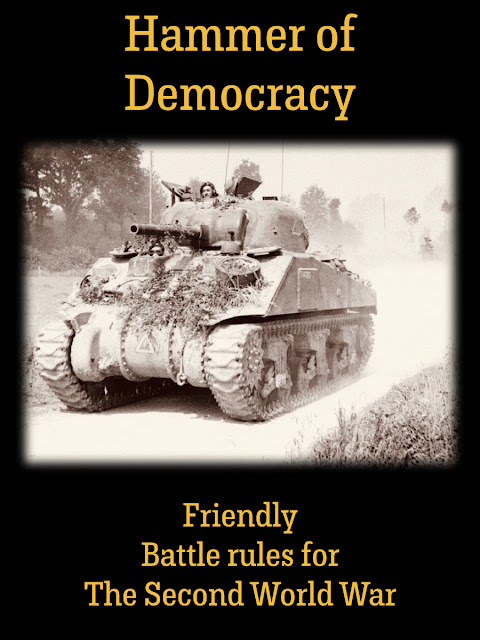 After almost a year, Hammer of Democracy is finally released to the unsuspecting public.

So what do we have here? WW2 wargaming, based on the Squad Hammer system:

Fast, friendly, open to your own judgements but fully featured as a standard wargame.

You get a scenario generator, vehicle lists, a tool box to cover unusual situations, traits and a points cost formula so if you need a vehicle I didn't include, you can make it yourself.

If you prefer life a bit less predictable, you also get a random army generator, perfect for pick-up games and of course all the stuff you'd want in a game normally, like artillery rules, smoke, etc.


The core of the game is the order system, allowing only a limited number of actions each turn, coupled with the Support system, which lets you coordinate your machine guns and anti-tank guns with your assaults and defensive operations, in a really cool combined arms manner.

Most dice rolls are simple 2D6 rolls with morale and damage rolled into one measure, which I think may surprise you with just how elegant it feels in play.

Combat moves quickly and you can focus on commanding the battle, not fiddling with rules minutia.

Scale is 1 stand = 1 squad or vehicle. Any miniatures you have are fine, infantry can be based individually or on team bases.

If you already have figures based for Crossfire, Flames of War, Company Command or IABSM, you will be fine. Just get the rules and dive in.


If you purchased the beta version, a discount code will be going out tomorrow or the day after. If you don't receive it (or can't wait!) email me at nordicweaselgames@icloud.com

Indiegogo backers should also email me for their copies.
Posted by Weasel at 11:46