We are proud to release Squad Hammer Core. 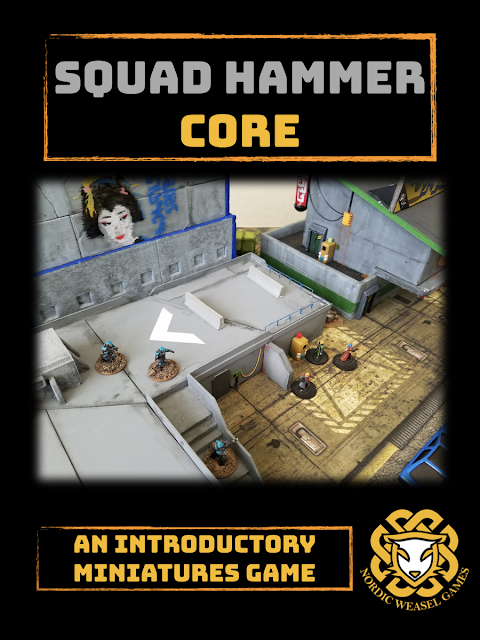 What is that, you ask? It's a mean, lean, core rules only version of Squad Hammer, allowing you to play everything from WW2 skirmishes to far future space fantasy.

Focusing on the fundamentals of miniatures combat, Core offers the fast-moving Order and combat systems of Squad Hammer and a handful of story-seeds and pre-built units to get you started.

Perfectly suited for players who enjoy a simple beer&pretzels friendly game, who enjoy creating their own rules around a solid foundation or who want to dip their toes into a more narrative and "open" sort of gaming.

This isn't just the same old Squad Hammer rules though. We didn't just rip out a third of the book.

Every rule has been revisited, polished up and improved letting the game shine more than ever before, incorporating ideas and experience from the upcoming Hammer of Democracy.

On top of that, we've included some absolutely gorgeous gaming table photos to get you inspired, as well as illustrations of some of the quirkier concepts.

It's Pay What You Want. Grab it for free or pay what you feel it's worth. Come back afterwards and pay more if you change your mind.

Whether you want a game you can tinker with, a quick-and-easy side-game for those nights or you want to ease in before upgrading to the full Squad Hammer rules, this is for you.

On top of that, we're preparing a "Toolkit" which will contain more options, ideas and mechanics than you can count (well, okay, some of you guys are pretty smart, so maybe you can count that far).

As a special promotion, I am offering a deal:

If sales for this version reaches 500 dollars, I will make a plain-text version available under an Open Gaming license, allowing spin-offs and fan-works.

If sales reach 1000 dollars, the Toolkit will also be Pay What You Want.