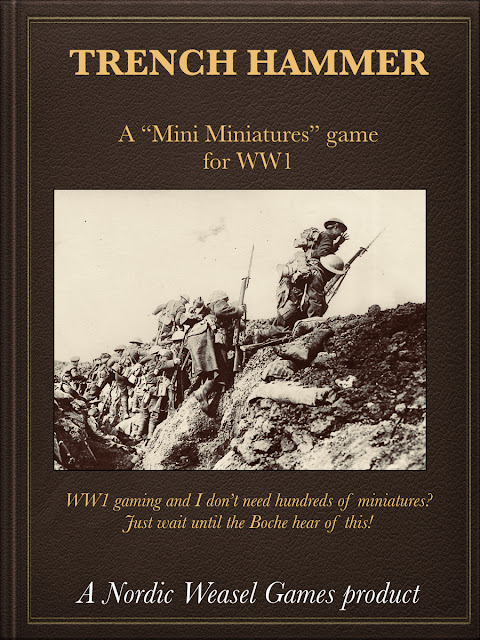 You can run a platoon to a company with no trouble and of course we include a few nods to campaign gaming.

The package includes details on organizing German and British platoons plus 3 scenarios.

Trench Hammer is what I've termed a "mini mini's game": A game that has a lot of finesse and chrome but in a small page count and a small price tag.
Grab a copy, buy a few bags of 15mm figures and you can have a fully playable game on the cheap.

Heck, do it for Christmas. We both know you're going to want to escape your drunk grandma complaining that the people in TV are hiding her socks, and where better to do so than with a new wargame, some unpainted miniatures and a few Ospreys books for a new war gaming period ?


http://www.wargamevault.com/product/229525/Trench-Hammer-WW1-fighting-on-the-cheap
Rules are available here for 4.99.
You do NOT need a copy of Squad Hammer to use this.


Second, based on feedback, the price for the solo Blade&Lockpick game system is reduced to 2.99.
If you were hesitant because you like the idea of a group/solo oriented task system but don't want to pay for an oracle you won't use...well, now you can get the whole thing for half the price.
Fair, no ?


Finally, we're participating in the Winter Offensive.
If you've held off on grabbed NWG titles such as LaserStorm, Clash on the Fringe, Starport Scum, No End in Sight or...well, any of them, now you can do so at a nice discount.

You deserve some gaming don't you?