Squad-Hammer. Any army any where.


At any given time, I have a large number of "secret projects": Things I tinker with, half-written drafts, games at 85% completion, ideas that could become product at some point.

Today's announcement is something from the "secret project" drawer: Something that has sat around in near-completed forms for a very long time. Something I've kept taking out, tinkering with, then put back on the digital shelf.
Something that I kept wondering if people would be interested in.

Finally, I showed it to people and they were clear that they would be interested. So it's time to show it off for the world:

I am proud to announce the release of Squad-Hammer.

What on earth is Squad-Hammer you ask?

Well, the cover probably tells you more than I could: 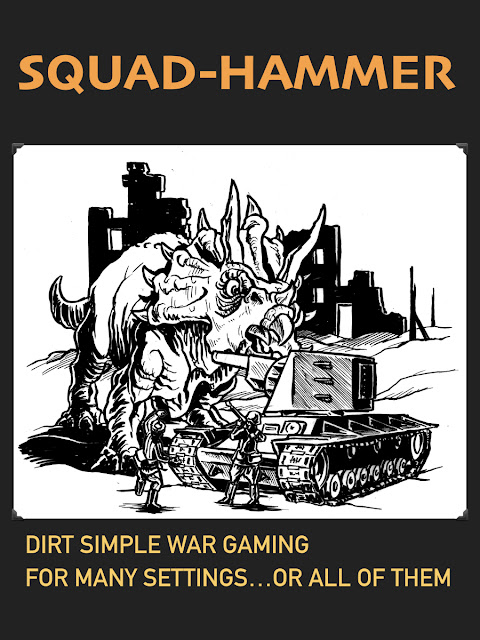 I imagine by now, I have lost half the readers and the other half is very very curious.

Squad-Hammer is NWG's take on the "ultra simple" style of games like "One Hour Wargames" and "FUBAR", two of the most influential games in a very long time, in my opinion.
Simple, straight forward rules that probably fit on an index card if you have small hand-writing.

What Squad-Hammer adds to the formula is the stuff that I always try to do with my games: Expand the scope: You can build your own units here and I give you lots of tools to get started. Anything from tanks to winged demons is possible and if we can build all those units, we can have them fight each other.

Whether you want to play a strictly historical game, a fantastical scifi game or you want to run your Vietnam era Americans against an alien invasion (and some mercenary Star Wars mini's on the side) is up to you. The rules won't tell you not to have fun.

The third game that acted as inspiration was "I ain't been shot mum", specifically with its player defined target numbers.
We provide guide lines but ultimately, players will sit the hit numbers for any given shot themselves.
Keep it as basic as you want or factor in everything from smoke in the streets to the fact the gunner just got a "Dear John" letter from home. Your call.
Of course, there's some pre-set target numbers as well, if you just want to use the rules and not fiddle with figuring this out yourself.

If you want to calculate points values for your creations, there's tools for that (even if they are a bit open-ended this time).
If you want to set up random missions on the fly or play a campaign, you get tools for that.
Need to teleport your elf assault jedi into position, while calling in an orbital bombardment? Yeah, I got you.

Did I mention the core rules probably fit on an index card?

By now, you already know if this is the game for you so go grab it. I look forward to hearing about the mad things you come up with.


http://www.wargamevault.com/product/222978/Squad-Hammer-Dirt-simple-gaming-for-many-settingsor-all-of-them
Posted by Weasel at 16:20