Scum of the Earth demo version 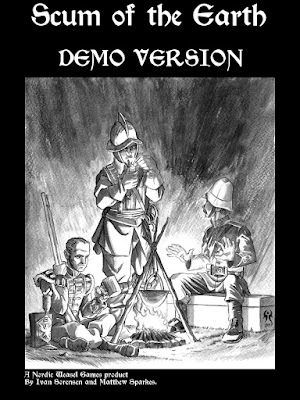 For players on the fence, we've made a Demo version available.
This gives you the basic game rules for infantry and cavalry actions (with as little removed as possible) including formations and 10 unit traits.

Essentially, for a dollar, you can check out the rules, play a game or three and get a good feel before deciding if you want to get stuck in for real.
Of course, if you're just casually interested and black powder gaming is an occasional pleasure for you, maybe the demo will have everything you could want.

Available here for the cost of a decent candy bar
Posted by Weasel at 16:44 No comments:

One of the strengths of Nordic Weasel products is that they are written to be tinkered with.

The Variant Rules pack provides a collection of new options for your games of both Starport Scum and Dungeon Scum, ranging from the exceptionally simple to the more involved.

Inside, you will find 17 variant rules, covering everything from making the game more or less deadly, more options for sneaking around the battle, outflanking enemies, new initiative options and rules for first aid and dodging in combat.

As a bonus you also get a gnarly table for determining the effects of a Gruesome Death result.

Available here for 2 bucks
Posted by Weasel at 15:19 No comments:

Scum of the Earth FAQ

A few simple Q&A's from the past week or so.

How many units should I have to play a game?
We assumed 3-4 units for starting out, moving to 6 or 7 for a "proper" game.

How are figures based?
Use the figures you already have based.
To get the frontage the rules assume, bases should ideally be in the 20-25mm wide range.

The number of figures per base is up to you: In 25 and 28mm, we assumed people would use individual figures while smaller scales will probably want to stick a few guys on each base.

Units are 6 bases for infantry (occasionally 5), 4 for "dragoon" types and 3 for proper cavalry.
Artillery is one gun and 3 crew figures.

What happened to the beta version?
Since it doesn't look super nice and had some differences from the final rules, it was taken down.
You should still be able to access it through your Library on the Wargame Vault.

I am working on a Demo version which will be available to take its place.

What does a unit represent?
We follow the approach of games like DBA, AK47 or 1 Hour Wargames where units are intentionally vague.
They could be companies, battalions or even regiments as you find the need.

Mostly, they're just your troops.

Doesn't a sliding unit scale mess with range, frontage and a million other things?
It does, but the game works out okay in any event.
Essentially, we assume that larger units also have correspondingly more ability to project themselves.
To take an example, a company of troops can only spare a few men to range ahead but a division may well have an entire battalion skirmishing.
This means that we can justify retaining the same weapon ranges across the scale options.

Players with very specific situations can of course adjust to taste.

Do I have to use the Average dice?
We recommend it as it produces the sort of even performance that characterizes linear warfare, but you can throw it out and just roll a D6 instead and the game will work just fine.

Weapons seem inconsistent across periods?
They are at times.
The  aim of period rules is always to reflect the period in question.
So a given weapon may be more or less effective for a particular period, because of how it relates to other weapons in use and the troops employing it.

I have things to say about my favorite historical period!
Good!
Let me hear what you have to say.
The intention is that missing periods are filled in over time and trait lists get expanded as we go.

Will there be other games based on this engine?
Probably yes.
Posted by Weasel at 14:20 No comments: Available here!
Posted by Weasel at 18:03 No comments:

Scum of the Earth reference sheet

As a teaser, the reference sheet (subject to one or two tiny changes) can be downloaded here:
https://drive.google.com/file/d/0Bw7GPI0bwHoSY1BMWGN1aTlpNWM/view?usp=sharing The Vehicle Guide is now available for Starport scum, covering how to acquire vehicles, how to build them in the game rules, how to move and fight with them and how to fix them back up afterwards.

Originally, this was intended to be a combo with the starship rules but I realized that starships bring all manner of other expectations that would make it a bit too heavy, so they will get their own, separate expansion pack later on.

The models on the cover are from Armies Army and are 15mm scale.
Posted by Weasel at 16:08 No comments: