From Shako to Coalscuttle released!

http://www.wargamevault.com/product/203068/From-Shako-to-Coal-Scuttle?src=newest
Posted by Weasel at 23:05 No comments: 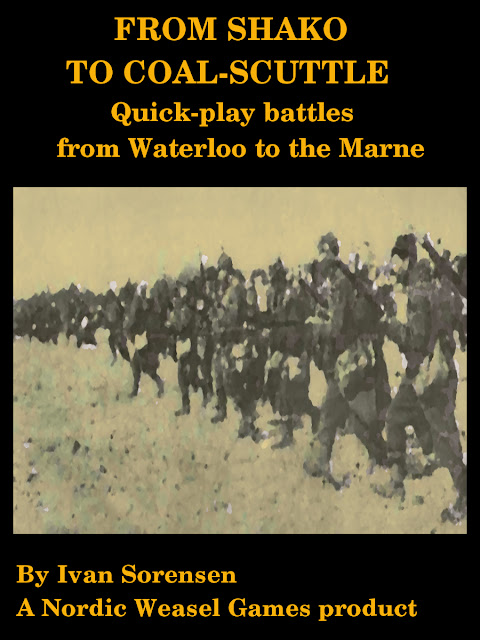 Somewhat overdue, you may recall a public beta test last year for "From Shako to Coal-scuttle".

Well, I am pleased to say that the rules are almost here (Tomorrow if all goes to plan, Tuesday worse case).

So what are they?
They are somewhat abstracted rules aimed a a simpler gaming experience, taking a bit of inspiration from some of Neil Thomas' wonderful creations.

Enough chatter, whats the scoop?
The rules cover warfare nominally from 1805 to 1914, being roughly the period where men fought mostly in formed ranks and armed with firearms.

What is the scale of things?
We've borrowed the "Neil Thomas" approach of having an army for a scenario always be around a certain size of figures, in this case 8-15 units of 4 stands each.

This means that depending on preferences, each unit may be a battalion, a company or a brigade as the need arises.

The rules assume that infantry with smooth bore muskets will engage at 6" with improving firearms engaging at ever increasing distances.

(I should clarify that the good Thomas had nothing to do with these rules, I am simply giving his name to give proper credit, though the idea goes back to DBA of course)

Okay, that's the Neil Thomas part, what about the Nordic Weasel part?

Charging and firing uses a "one roll system" similar to Fivecore, where all results from an attack are immediately apparent with no follow up rolls.

Essentially, roll a handful of dice (typically 3-5) and count out 1's, 5's and 6's.
Every 1 forces the enemy unit back, every 5 inflicts Disarray and every 6 destroys a troop stand.

If you've played Command and Colours it's not super unlike how that game works.

This means there is no "roll to hit, roll to do damage, roll for morale, roll for moderate discomfort and brownness of pants" chain.
One roll and you know what happened to the guys at the receiving end. We call this "effects driven game design".

How is the turn sequence?
It's an IGOUGO which I felt fitted the period best allowing the move and counter-move that books always talk about.

Let me give an example:
I am commanding the Prussians with a Command rating of 2 and my army is rated as being Disciplined.

I can move and fire with all my troops and I can attempt to rally one unit for free and carry out one Shock action (such as charging, double-timing cavalry or pushing through dense ground).

We've used the assumption that basic actions are always possible, due to the local unit commanders, while complex actions are difficult to carry out and require concerted efforts.
An assault on the enemy line in a battle report of the day was always a big deal, so it should be a big deal in our games.

If all else fails, there are rules for sending forward your captains and colonels to push the enemy harder but they may of course not survive that.

Are there troop stats?
Individual units do not have stat lines, but the army is rated in aggregate for its Quality and Discipline as well whether its Brave and/or Disciplined.

Artillery likewise falls into 5 classes based on technology and towards the end of the period, the Gatling and Maxim guns of course show up to make a mess of things.

How large should my army be to play?
A typical army might be around 10 units of infantry (40 stands), 3 units of cavalry (12 stands) and 2 artillery units (2 or 4 stands depending on preference).
Rules also provide for light troops and heavy weapon stands.

What other features are included?
Campaign rules as always, some scenario options for surprised armies, elite units and so forth, a simple random army generator and a basic points system.
You also get a "meeting engagement" setup that you can use to get your feet wet with the rules.

What has changed from the beta?
Almost everything in the game has been tweaked up and a lot of rules have been cleaned up to make the game simpler.
Rather than tracking which stands are stunned, you now simply track Disarray by unit, requiring just a couple of markers to be placed.

More optional rules have been included, cavalry has been toned down slightly and of course, you get the benefit of the new additions to the game.

Page count and fluff?
The game will be just about 50 pages, give and take a single page, and that's with everything included.
It's a very tight little package.

It's all text too, for printer-friendly purposes, with maybe one exception.
I figure you all have enough nicely looking miniatures to look at already.

Who might like this game?
If you want to play what feels like a big battle, but without painting thousands of figures and taking 8 hours to finish the battle (No hate on those big battle games, they're just not the goal of this set).

If you want to be able to play a number of related periods with one set of rules.

If the feel of battle is more important to you than exact simulation.

Who shouldn't buy these rules?
Players who are very demanding of exact simulation or who exclusively play a single period within the time frame of the rules may be disappointed.
By it's nature, a game intending to cover a lot of ground must omit particular details in any given period.

Hence, rules written specifically for the Napoleonic wars (for example) can afford far more detail for that topic.

The price should be 10 dollars and it'll be available through the wargame vault very shortly.
Let me know if you have any questions.
Posted by Weasel at 21:06 No comments: