No End in Sight revision

As the revision to NEIS goes on, here's a summary of the changes.

As mentioned before, none of these are final so please test them before panicking :-)

Once things finalize, any changes will of course be ported over into NSIS as well.

*Turn and phase have been reversed. A turn is a number of phases, with a phase being one activation roll.

*Squads can be rated as experienced, in addition to their troop class.

*Permanent stress is gone. You just remove 3 stress at the end of the turn.

*Professionals do not ignore command distance. Instead, pro squads have an assistant leader and may measure from either their assistant or squad leader.

*Group actions are official now. They also don't suffer penalties any more (prior, group fires were shock only)

*Take command can affect up to 3 figures close together.

*Troops can rush at the players discretion, even if out of sight. Troops in sight and out of cover must rush as before.

*Failing a rush does not pin you automatically. You are instead fired upon. Makes reaction fire a tad less powerful.

*Experienced troops rolling a 1 for rush distance may choose to remain in place.

*There are no longer a minimum kill dice rule.

*Irregular troops now just suffer a pin for every 1 on hte shock dice (instead of the old ammo rule).

*Experienced firers get an extra kill die for every 6 on the kill dice.

*Cover saves now depend on the terrain features.

*Two degrees of body armour now in the rules.

*Pinned figures that fail panic checks retreat 6" instead of being removed.

*When firing, groups in cover do not count Pin results when taking morale checks, only casualties and wounded.

*If a morale check fails, retreat distance is 3" plus dice roll.

Email ThisBlogThis!Share to TwitterShare to FacebookShare to Pinterest
Labels: No End in Sight

Laserstorm plays very simple but the rules throw a LOT of terms at the player.

So we're going to clear up what each level of the organizational hierarchy mean:

Stand
One figure or base with troops on it, representing one individual vehicle or a fireteam of 4-6 soldiers.
This is the smallest element that can exist in the game and is basically one figure.

Unit
Several stands are organized into Units. A unit must stick near each other during the game and will take morale checks together.
This is what Epic used to call a "detachment" back in Space Marine days.

A unit consists of typically 2-6 stands but some stands can form a unit all on their own.

Task Force
The Task Force is only used as an organizational step. If you build your own army using the included rules, you build a number of Task Forces.

Each type of Task Force will dictate how many units of each type you can include.

Players of warhammer 40K will recognize this as very similar to the detachment organizations in later versions of that game.

A task force typically has 3-6 units comprising it.

Battle Group
On the table, your force is always broken into 3 individual forces for activation purposes. Each such battle group receives one card in your turn deck.

A battle group may contain anything from 2 to 20+ units. It may contain entire task forces or parts of them.

Army
All your forces in one game is an Army. During a campaign, each separate force on the campaign map is an Army.
Armies consist of one or more task forces.

When an Army takes the field, it is temporarily assigned into 3 battle groups.

An army thus always contains at least 1 task force and could potentially include any number.
On the tabletop, an army always forms into 3 battle groups.

An army group will have at least 1 army and may have many more, depending on the size of the campaign.

Expeditionary force
The entire, combined forces available to a player in a campaign makes up their Expeditionary Force.

The EF always consists of 3 army groups and may thus contain a very large number of armies.

Working through the rewrite of No End in Sight with snazzy rules updates and whatnot (after a hiatus, handling a few things).

Reception to LaserStorm has been fan-friggen tastic. 72 copies sold so far and initial feedback has all been positive.
Hopefully it remains that way once people get it on the table :)

There WILL be a Battle Pack soon, though it may be the first week of October instead. It'll be relatively short but it'll have a fan-submitted skirmish game for you to check out. Stay tuned. 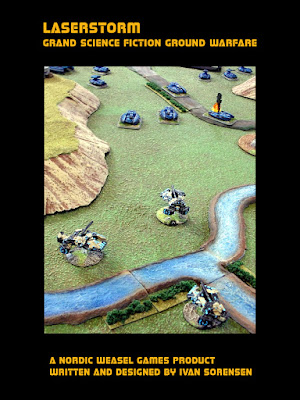 More tanks, more robots, more war!
LaserStorm is 6mm science fiction on a massive scale.
Each troop stand is one vehicle or a 4-6 person fireteam. Units are platoons and the game can scale up to an entire battalion on the board, if you have the table space.

*Not a single counter, marker or indicator placed on the table, ever.

*No record keeping or tracking for any units, ever.

*Units are distinctive in play: Tanks are durable but vulnerable to close assault, super heavy tanks are mobile bunkers and massive behemoths can stride right through a defensive line, crushing and terrifying enemy troops as they go.

*Morale system sees units driven off the table and brought back to resume the battle again. You can actually reorganize and redeploy during a game, to open up new fronts or outflank the enemy.

*Choose from 25 ready-to-play units, put your own together using a fast "Assembly Line" where you simply match up vehicle hulls and guns or use the points system to build your own troops from scratch.

*Unit types that can be built include infantry, tanks, grav vehicles, cavalry, field artillery, giant robots, heroes and many more.

*A standard objective-oriented scenario to get to grips with.

*Unit traits included to customize and build unique troops, such as scouts.

*A small quick-play scenario that should be playable with almost any scifi figures on your shelf.

* * * * *
LaserStorm is intended for use with 3mm, 6mm and 10mm figures.
All dice used are plain, six-sided dice. No markers or counters are required but a deck of cards is recommended.
Posted by Weasel at 16:41 No comments:

A few more Clash on the Fringe Q&A

Can you enter close combat with the Evasion trait?

As written, but this is not intended and will be corrected in the next update.
This also apply to the "Dodge" result on the hero injury table and the move provided by stim pack survival.

What does "No bonus for weapons" mean when you are Heads Down in close combat?

It means that you cannot get any bonuses on the close combat roll (such as two weapons) or get any trait bonuses (such as Swift). You still apply the penetration score of the weapon.

What if I have no close combat weapons at all?

Penetration 0, -1 to close combat roll and cannot dual-wield. This is hidden away in the weapon charts, I'll try to make it clearer.

What if I have more than 2 arms?

For simplicity, you still only get the dual-wield bonus. If I do an official four armed race, I'll give some thought to quad-wielding though.

How does the "You're going to be fine!" order work if you receive more Stress markers after it was issued?

"You're going to be fine!" is a status effect that lasts until the unit activates next, and as such, it will apply to Stress markers that are placed after it was issued but before it wears off.

When on Alert orders, troops may reaction fire at targets that are not one of the 3 closest. This will be added to the next update, but you may as well start using it now. It was always supposed to be that way, but got left out for some reason.

The next update will have several small typo's corrected as well. If a particular typo galls you, let me know, so I can correct it.
Posted by Weasel at 19:20 No comments:

If all goes well

If all the stars align right, Laserstorm will be in your eager hands this Sunday.

If all does not go well, then it'll be very shortly thereafter :-)