I've addressed these before but I figured it wouldn't hurt to do so again:

FiveCore and status effects:
A "Status" in FiveCore is an involuntary state you are in, because of an incoming attack.

The possible status effects from least to most bad are;

Specific systems use alternate terms for these but the effects are the same.

A figure or stand is never, ever, under any circumstances, subject to multiple status effects. If a status effect would change, the previous status is discarded immediately and completely.
For example, if a Bailed figure goes Down, he is now Down. He does not have to recover from being Bailed, abilities that help him recover from Bailed status do not help him and once he recovers from being Down, he is not Bailed.

In case of two status effects applying, apply the most severe (from the list above) and ignore all other effects.

Cover:
A figure in cover must declare if they are firing or hiding. If they fire, they can be fired upon with NO reduction in firing dice.

If you fire into a wood where a figure is placed, you do NOT drop Shock dice.

Rerolls:
When dice are rerolled, the original score is always discarded and the new roll is applied. This applies in all NWG games, unless explicitly stated otherwise.
If a roll allows you to roll twice and pick the best result, it means just that: Roll two times and choose either result.

In theory, either result could be rerolled, which would take place before you select which of the final results applies. I don't think there's any situation that causes that to happen, but just in case, here you are.

Abilities that allow a reroll on a specific dice result (such as always rerolling a 1 on assault dice) apply to all future rolls, unless stated otherwise.
For example, if you always reroll 1's on assault dice, keep rolling until you get a score that is not a 1.

Opposed rolls and rerolls:
If an opposed dice roll (like a Brawl/assault) allows a reroll, unless explicitly stated otherwise, both players must roll, before electing to reroll.

If both sides have a reroll, write down if you are rerolling or not. Optionally, cancel out the rerolls but its more interesting the other way.

Working on the army building stuff for Laserstorm, the upcoming 6mm rules.

Basically you'll have a few options for how to build units:

You can of course simply assign whatever stats you want and sit down to play.

You can pick from the ready-made units included in the rules.

You can use the "Assembly line" which will let you pick from a collcetion of vehicle hulls and weapons, bolt them together and go.

And you can build them using the points system and unit builder methods.

In this issue you get:

The Spotlight and Game design columns.

New traits, gear and units for Clash on the Fringe, including "Techno-Savages" for all your space-orc needs.

Five Knights on the Road. The playtest version of the long-awaited FiveCore medieval/fantasy rules.

Random event tables for No End in Sight and No Stars in Sight.

Disunity - An introductory Clash on the Fringe scenario by Nate Weber.

The playtest version of Elimination Protocol, a stand-alone original system for randomly generated bug
hunt games. Do you want to live forever?

Terrain encounter tables for any wargame. Ever wanted entering an unexplored terrain feature to be a bit more unpredictable?

Fluff for the Fringe setting, this time discussing mercenaries.

With the release of Trench Storm, here's some common questions answered before you even had a chance to ask them!

Each base/stand is one squad (or equivalent), organized into detachments of typically 4 stands.
Vehicles and heavy weapons are based individually.

Each detachment needs an additional Command stand as well, so 5 stands per platoon.

How big an army can I command?
Anywhere from a company to about a battalion if you are ambitious. Start a bit smaller, until you really get the hang of it.

What scale of miniatures?
Above 15-20mm, the ranges might start to look a bit cramped. Below that and you'll be fine.

Standard infantry move is 4" and infantry firing range is 18".

What is the basic firing mechanic?

Very straight forward. Each type of stand gets a particular number of firing dice out to a certain range. Add up dice, roll and make saving throws based on terrain.
Inflict enough hits and the target is Disrupted (even if they made their saves). Inflict a large amount of hits and they become Demoralized.

Do the rules reflect changes in tactics over the years?

Yes, they do. Closed Order formations are covered (effective in melee but tend to get shot to pieces) and as the war progresses, troops can utilize "Advance" orders, allowing them to move and fire in the same turn, whereas early war troops must be given distinct orders focusing on one thing.

Pretty abstracted as a general support option but yes, you can have a Sopwith come in and strafe the battle field.

There's no air-to-air combat though.

You get tables to figure out what happened to your company or battalion after a fight, but there's no scenario generation included.

How complicated is artillery?

Not very. Each player gets a number of barrages available to them, rated by weight and quality (3 options for each).
Each barrage is preplotted at a specific point or terrain feature, but not a specific time.

Whenever you want to call the barrage, you announce this and roll to see if it's on target, delayed or ineffective.

Pretty simple and strikes a decent compromise between being easy enough to play and also limiting the player some.

Where does this game fall on the simulation vs beer scale?

It intentionally aims more towards the beer scale but without being silly.
The best example of this is that I tended to focus on flavour where possible. So you get rules for gas, artillery, on board weapons and a lot of other things that might not be realistic on a company-to-battalion level tabletop but they make the game feel more colourful by being there.

So we scale them down to fit.

Of course, people who prefer strict simulation can omit those and the game plays just fine too.
Posted by Weasel at 17:09 No comments:

A Trench too far? 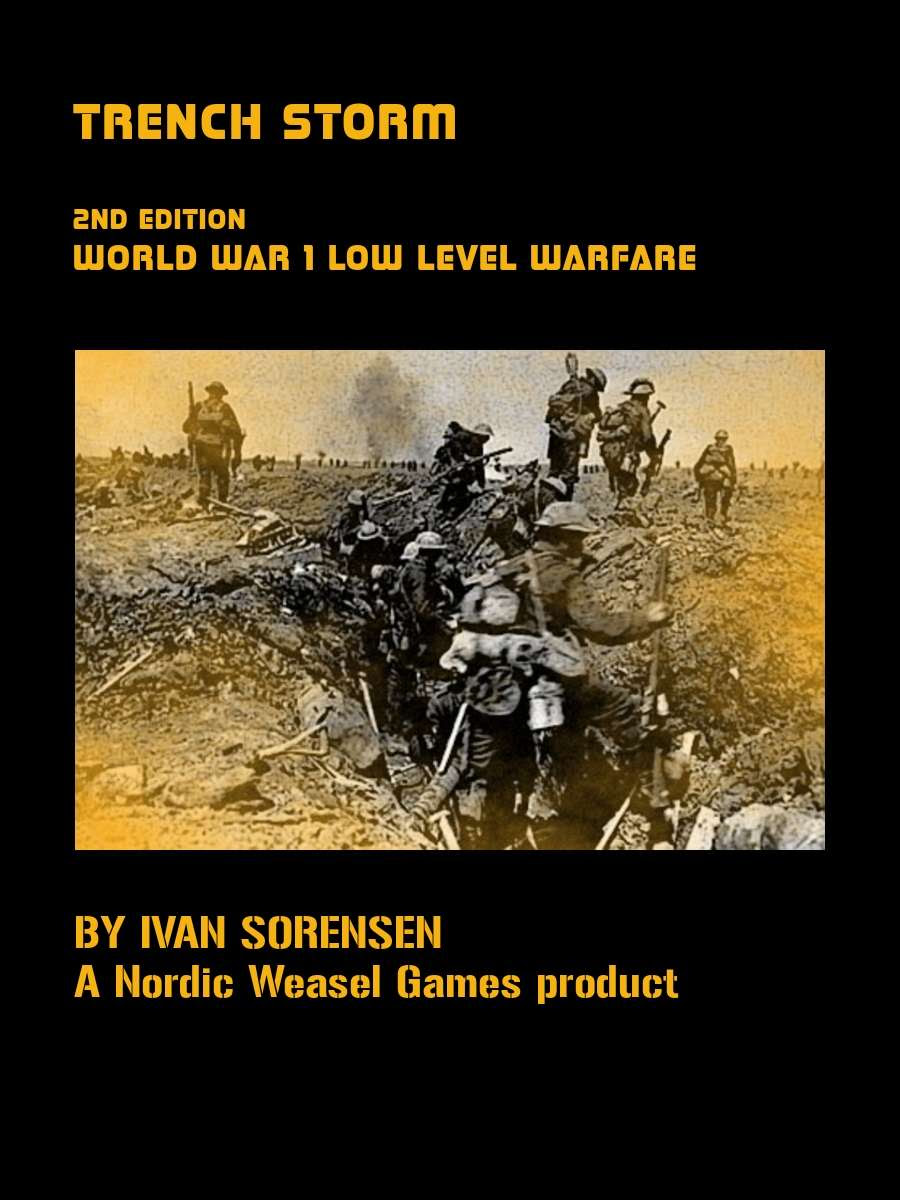 Over the top and to the green fields beyond!
Trench Storm returns after more than 10 years in a new second edition.
Providing rules for the first world war (and well suitable for russian civil war as well), Trench Storm is quick to play, using straight forward game mechanics.
Units are platoons (or their equivalent) with each infantry base representing a squad of soldiers.
A typical game may stretch from a company to a battalion or so.
Rules include mechanics for off-board artillery, gas, tanks, the various weapons found on the world war one battlefield and a system of traits to portray unique forces such as trench raiders and elite formations.
Rather than focusing on just one narrow element of the war, Trench Storm has mechanics to cover you, from closed rank bayonet charges, all the way to platoon level fire-and-movetactics, all without having to consult a 500 page rulebook.
* * * * *
Note that while the rules do include advice on setting up forces for the table, it does not include specific tables of organization and equipment.
Also note that this is an original system and NOT a FiveCore or "In Sight" system game.

http://www.wargamevault.com/product/154642/Trench-Storm
Posted by Weasel at 18:44 No comments: