With a TON of projects going on right now, including turning Battle Hack into a full blown thing, scifi micro armour and....something else, things are pretty hectic.

The next Battle Pack issue will be a few days late but should be in your hands by the end of this week.

We got some pulp adventure, a LOT of Clash on the Fringe goodies, a world war 2 scenario generator and a bunch more.
Posted by Weasel at 14:25 No comments:

Unit Pack 1 for Clash on the Fringe 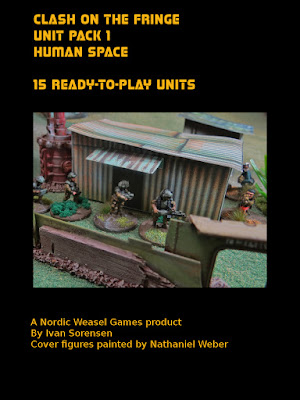 Getting started with the Clash on the Fringe rules, but you've been missing some ready-to-play units?

Want some more insight in the types of people that populate the Fringe-worlds setting?

Unit Pack 1 provides you with 15 new units, complete with unit profiles, weapon options and points values (for those that like that)!
6 units of infantry (including one unique unit), 3 new generic characters, 3 unique "special" characters and 3 vehicles.

All fit the Fringe-worlds setting but can be used in almost any science fiction game with no problem.

Email ThisBlogThis!Share to TwitterShare to FacebookShare to Pinterest
Labels: clash on the fringe

Some Clash on the Fringe Q&A

What is the deal with the Bulk trait?

It got missed out. It's meant to be the same as Inaccurate. -1 penalty to Training when using a Bulky weapon in close combat.

Do you get the area of effect for reaction fire?

Yes, though because of how the game handles timing, it often won't do anything.

To remind: Everything happens as it happens. This means that each figure in a moving squad activates, moves and suffers reaction fire one at a time.

Is there a Run option?

Not currently. If you wish to add one, make it an additional order that foregoes shooting completely but lets you move one and a half time normal Speed.
With testing I may add this to the rules.

Some traits seem similar but have small differences. Is this intentional?

This happens with some of the alien traits. Generally assume they are each written as intended and any differences are intentional.
If this becomes too cluttered over time, they might get stream lined to be identical.

What can you do after recovering from Heads Down?

Remember the timing rule: "Everything happens when it happens".
If you recover from Heads Down, no matter how you recovered, as soon as the marker is removed, you are no longer subject to the status.

This means that a figure that rolls to recover before taking any actions will be able to act normally (provided they succeed).

Can I simply walk into close combat?

One does not simply walk into Mordor but one CAN walk into close combat.
Storm actions just allow you to do so quicker.

Does moving into close combat cause reaction fire?

Yes. The only exception is the extra movement granted by the Storm action.

Prowling units are not subject to reaction shots. Does that apply even when throwing grenades?

Not intentionally so. The order only governs movement. I'll clarify this in a future version.

Does the Suppression weapon trait apply to unaimed fire?

When do leaders use their orders?

The Leader section explains it two different ways, the first is correct (When the unit is selected for activation).
The second explanation (when the leader figure itself is selected to move and fire) is a mistake, though you could play it that way if you prefer it.

Email ThisBlogThis!Share to TwitterShare to FacebookShare to Pinterest
Labels: clash on the fringe, Q&A

I'm not saying you should start dusting off those old 6mm Epic 40.000 and Space Marine armies, order some 10mm figures or look at basing some 15mm on team bases.

But you know.. maybe you should.

*Ivan is being both coy and secretive today*
Posted by Weasel at 18:41 No comments: