Happy thanksgiving and the new kitty 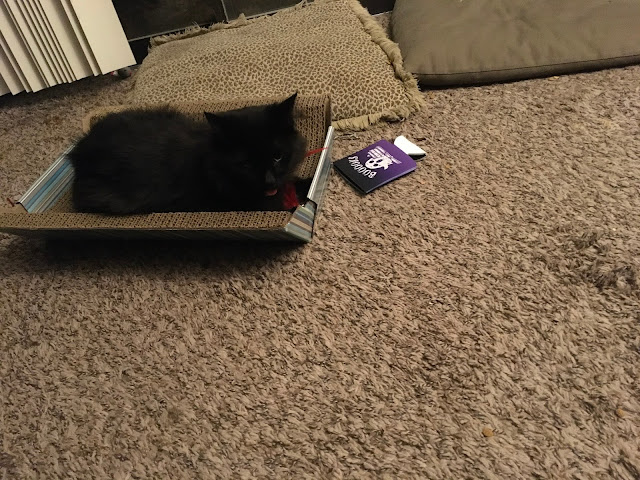 Introducing the new addition to our family Lancelot!
He is not quite as brave as his name might suggest: Plastic bags are still a terrifying monster to be studied from a safe distance. He IS however a lover and a scoundrel.
Thank you very much to everyone who supported us in the sale or through your kind donations. 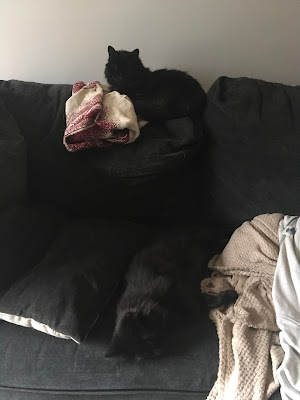 Here are both new kitty (bottom) and old kitty (top) having a moment of mutual understanding.
* * * * *
I hope everyone who celebrates it has a safe and comfortable thanksgiving. I know many of you didn't get to go do the gatherings you wanted to do, others had to do much smaller affairs or cancel altogether.
We are having just a little family gathering with the three of us and the new furry addition to the family.
If you are stuck at home and feeling a bit down, I have something for you all:
Just for today, tomorrow and Friday, you can pick up a copy of Starport Scum absolutely free of charge.
https://www.wargamevault.com/browse.php?discount=9ea5edc44f
Just follow the link and download your game. It's playable with any handful of scifi minis you have lying around. If you get a space adventure going this weekend, do me a favor and email me how it went.
With the year we've all had, we can all use a bit of joy :)
* * * * *
If space adventure is not so much your jam, for the rest of November, you can also pick up our revised medieval wargame rules for only a fiver.
https://www.wargamevault.com/browse.php?discount=9ea7f54632
Perfect for a bit of post-turkey day gaming. Maybe mount a viking raid to capture a turkey ? (Yes, I know, shhh)
* * * * *
Finally, Five Parsecs players can pick up scenario 5 Old friends bearing guns. A series of linked encounters complete with a "old rival" generation table.
https://www.wargamevault.com/product/337432/Five-Parsecs-scenario-5-Old-friends-bearing-guns

Just a quick bit of news.

I am still working to finish two un-specific things that have been outstanding for rather too long. I am hoping this week should be fruitful. Unfortunately, last week I got sidetracked with another paid gig on the side.

I know some of you have been quite patient in waiting for specific items and I'm going to have to just ask for a bit more patience.

A new option is available for Five Leagues, offering caves and pits to delve into. This both serves as a bit of a test for adding things to the world map, as well as testing out some ideas for future dungeon delve mechanics.

We haven't given him his new name just yet, but he went by Robin at the shelter. He's shy but the first introduction to Scruffy went very well, so photos will be forthcoming soon.

The timeframe for Fivecore 3.x is still before Christmas. I am kicking around whether to show off anything beforehand, but we'll see. Right now, I'd rather stay focused on getting it done than spending too much time slicing off chunks to show off.

We just got an opportunity to adopt an extremely friendly kitty to our family. As you may know, our old cat Mittens passed away earlier this year and Scruffy has been rather lonely, so we are very excited about the prospect.

Of course, getting a kitty fixed, getting all his shots and so on is rather spendy, so we are running a sale over the weekend to help defray some of those costs. In short, you get new gaming loot and Scruffy gets to make a new friend.

This allows you to pick up Renegade Scout:

and Scum of the Earth

all for about half normal price. These are beefy games with lots of content, perfect for the cold winter months.


Additionally, Clash on the Fringe, our original rogue trader adaptation is available as a Pay What You Want title. This is a fully featured scifi skirmish game with a lot of clever touches.

Finally, if you did wish to throw in a few bucks on paypal, I would welcome that as well. The address is nordicweaselgames@icloud.com as usual.

Above is the new recruit.

A ton of stuff this Friday

This friday brings a ton of cool stuff.

First, the Upgrade Pack for Five Klicks From the Zone.

This expansion pack focuses on giving you more rules options in your post-apocalyptic battles, including special character skills, gun upgrades, tougher enemies, a way to continue an existing campaign after you win and story points.

It is available at https://www.wargamevault.com/product/335330/Five-Klicks-Upgrade-Pack

Renegade Scout players can take better care of their troops with Battle Medics of Unified Space, which adds both squad-attached specialist medics and independent hero medics to your forces. https://www.wargamevault.com/product/335326/RS-Book-3-Battle-Medics-of-Unified-Space

With a new pack, the Elite Army Builder has also been updated to incorporate the new points values.
If you don’t have it yet, this is a complete compilation of all official unit options for the Army Builder in Renegade Scout, allowing you to construct armies easily.

KPS players can enjoy a nice record sheet by Jason. Simply go to My Library on Wargame Vault and download it. If you are still missing out on our medieval skirmish rules, grab it now before the fantasy expansion is finished, so you are ready https://www.wargamevault.com/product/311310/Knyghte-Pyke-and-Sworde

Finally October Hammer, our Russian civil war rules, sees two small updates to clarify weapon ranges and fixing a typo in the terrain section. If you fancy getting started in the cold east, why not check it out at https://www.wargamevault.com/product/230110/October-Hammer-RCW-gaming-on-the-cheap

Whev, it took a bit to get this one done. Between work projects, a bit of feeling under the weather and so on, it kept getting pushed back.

But enough excuses, here we go.

Note that this looks super long when you type it all out, but in reality each of these steps only takes a few moments. The entire process should only take you a couple minutes (at least until you go rooting for that one miniature that you know you have in a box and where was it...?)

Generating an encounter when we set out to go find some trouble.

The point of playing a miniatures game is of course to go fight people, so you can use all your miniatures on the table.

Unless we are traveling to a specific location, we will use the "Adventuring" column of the main encounter table. Essentially this is us just roaming the country side looking for trouble, as adventurers usually do.

If the number ranges look a little differently on your copy, make sure you have downloaded the latest version. The tables were changed some in the Marmoset update.

Normally you would roll and just take the encounter you get, however for the purpose of this example I am going to just say I rolled a 72, giving us one each of Roadside and Combat encounters.

If you roll both, you always generate the roadside encounter first. If we were using Roads well traveled we could use the expanded table there (Pretty slick bit of product placement there, right?) but for now, we'll just roll on the rulebook table.

The roll is a 24 meaning we've met a pilgrim wandering somewhere. We can choose to just say hi and move on or stop to interact. Of course, we'll do the latter this time.

The interaction roll is a 62, which means the Pilgrim is Friendly to us. Clearly, they are relieved to see a group of professionals looking to help make the area less monster-infested.

This means we will write down that we've made a Pilgrim friend. Later in the campaign, no matter where we are, if we meet another Pilgrim, we can declare that it is our old friend and roll on the Special Interaction table.

We need to know who we are going to be fighting. This is just a D6 roll with the highest Threat score being encountered on a 3-6 and the second highest on a 1-2. If you preferred, you could just make it an even chance of all available Threats.

For us, the roll comes up Outlaws with the exact enemy type being Thieves.

We narrate that the Pilgrim barely escaped from a gang of thieves with their life intact and has given us a pointer on where to track them down.

Next, we roll for the encounter type. The dice come up a 58, which means we encounter them while traveling (instead of being ambushed or finding a camp or lair). This is just a normal encounter battle.

Now that we know who we are fighting and how, we can determine what exactly we're up against.

We need to determine if there is any leadership present. The D6 roll is a 2, so the travel encounter table says they do not.

If they did, we'd have had to add extra figures to their count.

Since there are no leaders, a second roll is required to see if a Personality is present. This is just a 4+ roll and a 5 indicates we do meet someone. The D100 roll gives us a Brute: A big mean fella who is clearly the muscle of this gang.

For the number of opponents encountered, we always roll 2D6, pick the highest and then add the "Number" modifier from the enemy tables. I roll 2 and 4, so 4 on the die +3 (number) is 7 thieves. Any leader or personality is in addition so we'll be fighting 8 opponents in total.

The enemy table says thieves get 2 archers, so the composition is 1 brute, 2 archer thieves and 5 regular thieves.

We could try to bribe thieves, but we're here to have a fight right?

The Variations tables are optional but we'll roll for them. Basically we take two regular opponents, not archers, and roll to see what is special about them. This works best if we have a couple mini's that look a bit distinctive. (As a note, personalities and leaders are not subject to this even though the book isnt explicit on the point. It has to be a bog standard grunt).

I roll on each table and get:

One thief who is Manic and will be unaffected by morale checks.

One thief who is Untrained. Since their combat skill is already +0, this won't matter unfortunately.

Next up is deploying for battle, which we will tackle in a separate post.

I will have a lot more to say later, but I just wanted to let everyone know that the path to FiveCore 3.x has begun.

A major decision will be how much text to use as is, versus rewriting from the ground up. My main worry is that old and new sections next to each other will read incoherently, so we'll have to see.

A quick update for Renegade Scout adds the following tweaks to the army builder:

* Vehicles with 2 or more mount points can add an external Auto laser or auto slugger without using a mount point.

* This can be pintle-mounted. If so, it is fired by a crew member from a hatch and is a bit cheaper.

* This can be remote-controlled. If so, it's a bit more expensive but can be fired by any crew member instead of performing another role that turn.